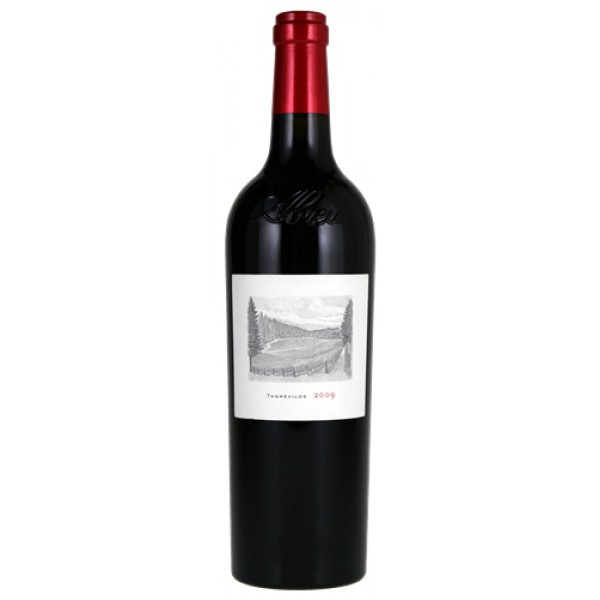 In 2009, the lengthy growing season and ideal weather conditions enabled us to harvest Thorevilos over ten days in early October. The 2009 vintage produced pristine, high quality fruit of uniform ripeness. We were amazed by the intense flavors in the fruit and the consistency of ripeness across the blocks. The Merlot and select Cabernet Sauvignon parcels were harvested first, while the picks to follow were comprised of varying percentages of Cabernet, Cabernet Franc and Petit Verdot. In total, four fermentations shape the final blend of 58% Cabernet Sauvignon, 28% Cabernet Franc, 10% Petit Verdot and 4% Merlot.

“With unbelievable intensity, a great, full-bodied mouthfeel and stunning purity, the 2009 Thorevilos sets the bar at a very high level for every other Napa producer. Beautifully textured and full-bodied with sweet tannins as well as a 45-60+ second finish, this sensational effort can be drunk early on or cellared for another three decades."  -Robert Parker Jr. | The Wine Advocate

ロバート・パーカーのワイン・アドボケイト (ロバート・パーカー) 98ポイント
"The 2009 Thorevilos displays a stunningly blue/purple color along with an exceptional nose of blueberry and blackberry liqueur intermixed with espresso, white chocolate and violets. With unbelievable intensity, a great, full-bodied mouthfeel, stunning purity, a subtle hint of wood, but no hard edges, this is one 2009 that does not have that broodingly tannic structure that is common in this vintage. This sensational effort can be drunk early on or cellared for another three decades.

As a set of wines, it is hard to surpass the four cuvees from the estate vineyards of David Abreu. As I have written many times in the past, all of these wines are truly world-class efforts that stand alongside proprietary red wines made from Bordeaux varietals from any appellation in the world. Abreu has two vineyards in and around the town of St. Helena, the Madrona Ranch at the base of Spring Mountain and the Cappella, which is further toward the town. Ironically, his Thorevilos is not part of any AVA, but might be one of the three or four finest vineyards in all of Napa Valley. It sits on steep hillside behind the luxury Meadowood Resort. His other vineyard is on Howell Mountain. All of these sites total about 70 acres, and while Abreu sells some of the fruit to other high quality wineries, he continues to produce around 240-320 cases of each of these four selections, but that varies with each year. They are called proprietary red wines, but there is no doubting that these cuvees are dominated by 60-75% Cabernet Sauvignon and have increasingly high percentages of Cabernet Franc, especially Madrona Ranch and Thorevilos which no doubt accounts for their incredible perfumes and complex aromatics. These wines are all aged 24 or more months in 100% new French oak. Abreu, who first established his reputation as Napa Valley’s premier viticulturist, and who has a list of clients that reads like the guest list at the Ritz Hotel in Paris on New Year’s Eve, is impressive. While he clearly suffers no fools, his formula is intense work in the vineyard, radical viticulture techniques such as shoot positioning, crop-thinning, and a belief that the vine is never happier than when its in the shadow of its owner. His efforts and obsessive-compulsive work in the vineyards can’t be underestimated when it comes to seeing the results of what is produced in the bottle. These are spectacular wines year after year. Even in a challenging vintage such as 2011, Abreu’s viticultural work has paid off, even from the valley floor vineyards of Cappella and Madrona Ranch. Looking at the four vintages of Abreu’s St. Helena vineyard called Madrona Ranch, which was first planted in 1982, this is another cuvee that is usually composed of 47-50% Cabernet Sauvignon and an extremely high percentage of Cabernet Franc, now averaging between 33-45% in most vintages with smaller quantities of Petit Verdot and Merlot added in. The Howell Mountain project of David Abreu tends to be a blend of two-thirds Cabernet Sauvignon and 15-18% Cabernet Franc and the rest Merlot. Coming from a higher elevation, mountainside vineyard, it is a completely different wine than the Madrona Ranch or Cappella. It also emerges from a bigger vineyard, although I suspect Abreu still sells some of its fruit to some of Napa’s better wineries. All of these wines are amazing efforts, but for me, there is something about the Thorevilos Vineyard that boggles my mind. Co-owned with Ric Foreman, this is a steep hillside site above and behind the famous luxury resort of Meadowood. This cuvee is normally a blend of 45%-61% Cabernet Sauvignon, 28%-40% or more Cabernet Franc, and the rest Petit Verdot and Merlot.
"  (Wine Advocate #209 Oct 2013 Robert Parker 98 Drink: N/A)

ロバート・パーカーのワイン・アドボケイト (アントニオ・ガッローニ) 96+ポイント
"Smoke, tar, incense and licorice are some of the many notes that emerge from the 2010 Cabernet Sauvignon. This is an especially dark, brooding vintage for Bryant. Cassis, pencil shavings and melted road tar emerge later, adding further complexity and nuance. Unlike the 2009, there is little in the way of early appeal. On the other hand, I see the 2010 drinking beautifully for many, many years. There is an underlying vein of minerality that gives the 2010 a sense of energy and focus. Anticipated maturity: 2018-2030.


Perched on Pritchard Hill above the shores of Lake Hennessey, Bryant is without question one of the most spectacular vineyards in Napa Valley. I don’t see any reason why the Cabernets that emerge from this property shouldn’t be among the top 5-10 wines in the valley each and every year, but continuity is the key to making that happen. Following the departure of Helen Turley in 2002, Bryant has employed Philippe Melka, Mark Aubert, Ross Wallace, Helen Keplinger and now Todd Alexander, who took over in October 2012.
"(Wine Advocate #204 Dec 2012 Antonio Galloni Drink: 2018 - 2030)